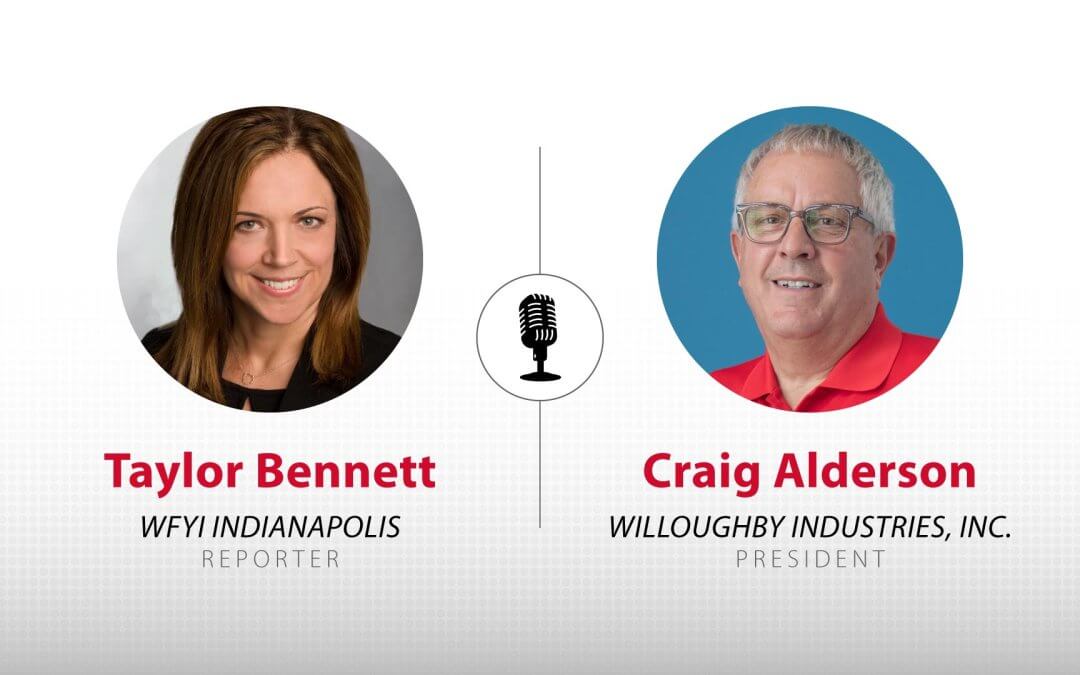 President Craig Alderson was recently featured on WFYI Indianapolis detailing one of the company’s keys to success after 75 years in business. Below is a recap, as well as audio, of his interview with Taylor Bennett entitled, “Local company finds solution to finding needed workers“.

Many employers are faced with severe worker shortages, but a local business on the city’s northwest side addresses the problem by providing opportunities for individuals who were previously incarcerated. WFYI’s Taylor Bennett spoke with Willoughby Industries’ President, Craig Alderson, about the effort to include people who are re-entering [the workforce] from the justice system.

Willoughby Industries’ President, Craig Alderson: I would love to tell you it was my decision. It preceded me. I’m in year 28, and the company—Willoughby—was already involved with the work release programs when I got there. At the time, we had a plant manager who was exceptionally skilled at directing people and understanding people’s varying backgrounds, and figuring out how they could—you know—turn into solid, productive employees. And he was just a talented guy; he helped us dramatically as we moved forward and through this. It’s just become a normal course of our business now, and it’s kind of interesting.

Bennett: How many do you have right now?

Alderson: Right now, I think it totals around nine, and it varies a little bit. In 2022—year-to-date—we’ve extended offers to four, we’ve hired three, and we get a lot of help—specifically—from the Indiana DOC. Commissioner Carter has been instrumental in helping us with this, and getting us navigated to the right people so that when an ex-offender becomes available and, is interested in looking, we can get connected.

And that’s one of the biggest battles right there because, I think in a lot of cases, the ex-offenders reach a point where they just don’t know what to do and there is a mechanism in place to help them. We coordinate with the folks at IDOC, and it just seems to work out well.

Bennett: Do you provide any kind of training when they come in? What’s kind of the basic procedure when you decide to hire an ex-offender and they come in to get started?

So we see it all through the spectrum. There are some that come in and have gone through a DOC-sponsored training program for—let’s say— welding, or different skill sets that they offer, and that’s a real bonus for us! But nine times out of 10, we have to train.

Bennett: You know, we’ve heard so much about employers desperately looking for people to work in all kinds of industries. Are you facing that same dilemma too?

Alderson: Worst hiring environment I’ve seen in 30 years—brutal! Cannot find any[body]; it’s awful. I say that from a staffing [standpoint]. I’m not being critical of people; I’m one of those people that says at the end of the day, where did all the people go? I mean that it seems like we used to be able to find people for different roles, and you knew you’d have to train them. It seems, now, that it’s much more difficult; much more challenging.

That lends itself to the ex-offender programs. I mean, it really does, because a lot of them come out, and there’s a lot of employers that simply won’t consider those folks for employment. And, to some extent, I understand that. But, once you learn what the program is about and have some experience with it, it’s not as intimidating—maybe—as, you know, it might be for someone coming right out of the blocks that says, “Okay, we’re gonna hire an ex-offender.” Because you can get pushback from existing employees that say, “Well, I don’t want to do that.” or “I don’t want to.” but—you know—by and large, that doesn’t happen.

Bennett: Congrats, again, on the 75 years, and great work on everything you’re doing there.

Alderson: Thank you very much.